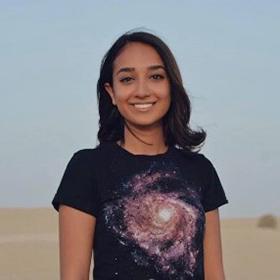 She has been described as a techno optimist, a communicator of popular science, and an advocate of curiosity, critical thinking, wonder, and awe. Raya is the founder and Chief Executive Officer of Awecademy, an award-winning organization that offers future-focussed and wisdom-based education. Through an online platform and offline programs, Awecademy equips young minds with skills, values, and mindsets for them to have a positive impact on humanity.

Raya is also the co-founder of various national and international initiatives including The Dubai Science Festival, Intelligent Optimism, and Cafe Scientifique Dubai, all organizations that serve to increase scientific literacy amongst the general public and have received up to 40,000+ annual visitors. Raya was the Business Development Manager at Silicon Valley-based startup SheWorks, a contingent workforce platform. She has spoken at numerous conferences including G20/Y20 Summit, Global Education Forum, UNESCO Expo-Sciences, GESS Leaders, and much more.  She is recognized by the BBC as one of the most influential women worldwide.